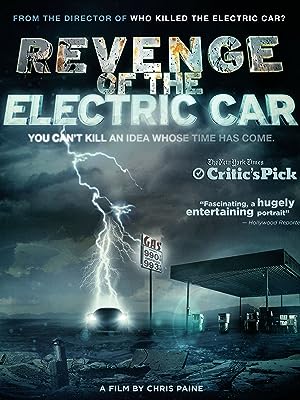 Following the movie Who Killed the Electric Car, with the extinction of the EV1, many things happened several years later including the economy taking a huge dive and GM about to go bankrupt, in part because of the bad press GM received after the deal with the EV1 . GM’s Rick Wagoner admits that killing the EV1 was his worst decision. Revenge of the Electric Car is an in  depth look at how the EV made a comeback after they were crushed.

Bob Lutz from GM, who was very dismissive of electric cars and global warming had a change of heart and reconsidered manufacturing electric cars again and started working on the Chevy Volt which was a plug in electric hybrid; it took many years to get it right.
Around the same time the startup company Tesla was trying to make the Roadster, which ended up costing too much money to make it a production car. The company was losing money and the faith of the customers for raising prices and not delivering on time. But Elon Musk he was determined saying ,“we won’t stop until every car on the the road is an electric car!” and ended up getting Entrepreneur of the Year in 2007 with the new Model S.

While all this going on, Nissan’s Carlos Ghosn was steady moving forward with the Nissan LEAF and based his whole company strategy on making their first production electric car. He believed that this is what customers wanted and what was at stake was huge, but he was determined.

Then the government gave GM a bailout. Tesla received a $465 million dollar loan from department of energy and Nissan got 1.4 billion dollars. It was a race with a $6 billion objective between the three: GM, Tesla and Nissan.

Electric cars not only made a comeback but they were actually here to stay, as we now know.

This movie shows the history AFTER Who Killed the Electric Car and how this time period has shaped where we are today in the electric car industry.

Besides the DVD, the movie is available for direct digital viewing at places such as Amazon Prime and iTunes.

Check out viewing and purchase options of Revenge of the Electric Car on Amazon: https://amzn.to/2CukHkz